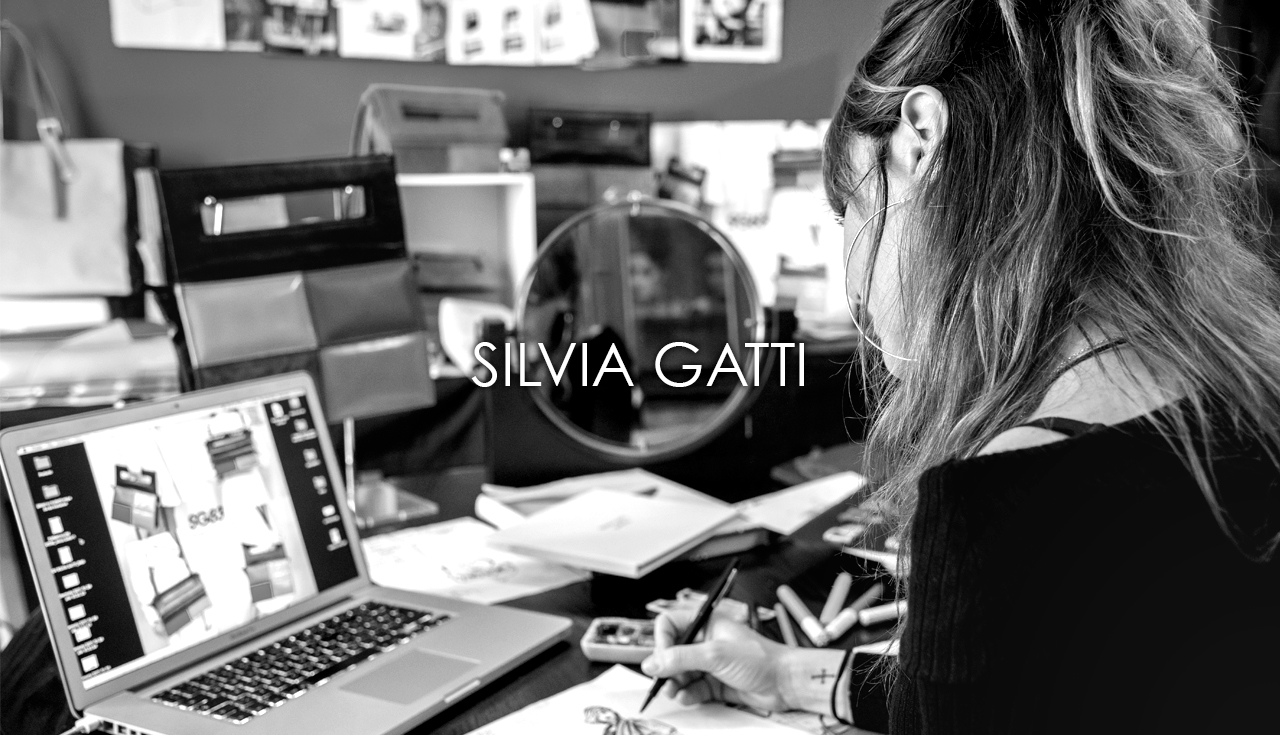 Captivating Design and selected raw materials for resistant, durable and functional handbags: SG83 is the new brand made in Parma, behind which lies the “Modern Vintage” style by Silvia Gatti. Silvia, born in 1983 in Parma where she grew up and currently lives, reveals her love for Brick Lane, a district in the East End of London, where she has had the opportunity to live and work for few years and where she never misses a chance to return as soon as possible. A multicultural place in constant artistic ferment, vibrant tones, full of energy and contagiously creative.

Young, but already with diverse experience in the industry, Silvia has refined her professionality in the fashion industry, working in the style department as a designer for the development of the product and the collection, of the well-known brand Coccinelle.

She combines the innate skill in drawing with the attention to details that can make the difference and make her bags real eye-catchers. Selected products, from finishes to fine raw materials that are handcrafted in a laboratory in the province of Parma. Only selected high quality Italian leathers, natural tanned and with accessories from local suppliers.

“Selected products, from finishes to fine raw materials that are handcrafted…”

Her philosophy is very linked to the “Made in Italy” and in particular to the “Made in Parma”. “Our city has been famous throughout Italy for its tradition of saddlery style”, she points out to us, underlining the great attention paid to the search for local manpower and the attachment to her city.

A young developing brand that will not go unnoticed. And in the near future? Follow her and you will discover it.

Text freely taken from: Article of the “Gazzetta dell’Emilia”

Silvia was born in 1983 in Parma, where she grew up and currently lives. The creative spirit that characterizes her, led her to attend the Paolo Toschi High School of Art, where she developed her skills in the figurative arts.

Just graduated (2002), she moved to Milan to attend the Brera Academy of Fine Arts.

To pay for her studies, she started working for an important Milanese vintage clothing boutique.

Hence the certainty: her road was to continue in the field of fashion design.

In 2004 she won a grand from the Emilia Romagna Region and the Max Mara Group to attend a course, thanks to which he started working in the fashion world.

Immediately after obtaining the certificate of the course, in 2005 she received a recruitment proposal as a Designer from “Coccinelle”, a famous leather goods company in her hometown.

She worked almost six years in “Coccinelle”, where she acquired many skills. She has drawn trend and sales lines, with craftsmanship and tradition in her DNA, thanks to the in-house laboratory.

In 2011 she started other collaborations in Carpi, with more responsibilities, skills and building new contacts, which resulted in her choice: to create and found his own brand, self-financed and self-managed in total autonomy. In 2012 her ambition leads her to the world of leather goods “Made in Italy”: she created her trademark “SG83 Handbags”, an acronym of the initials of her name and her year of birth.

The first challenge was to create a network of contacts (shops, private customers), also participating in hand-made craft festivals and joining some charity fashion shows to start with small steps.

At the end of 2014, to broaden her horizons, she left for England, a source of great stimuli and new challenges, a panacea for her creative personality; she found a job in London as a Product Manager and Designer for an English Start-Up with an international distribution network, totally “Made in Italy”.

In addition to the “creative research” area, she was responsible of management of suppliers and sample collections, lead the bag collection and supported the Art Director for the footwear collection.

She coordinated the work of a young and multicultural team: at just 32 years she was the figure of reference for the creative office of a “Luxury” brand.

Realizing her dream of living an intense experience abroad, with a wealth of know-how and a good command of the British language, she decided to return to Italy to better follow her entrepreneurial dream.

In mid-2016, she definitively returned to Parma, where she immediately started new collaborations and launched her Brand “SG83 handbags”.

Since 2017 she has also started a career as a teacher, successfully conducting several Master Courses for high level schools on the regional territory